It's not Your Fault,
Don't get Stuck With the Bill!
Let Us Help You For a Free Consultation
Member of:

Most Worker’s Compensation claims deal with an ongoing illness or disability. However, at times a family will find themselves dealing with the death of a loved one due to a work-related injury and need to understand Worker’s Comp and Death Benefits. As described below, these cases are complicated and you may need a Tennessee Workers’ Compensation Lawyer to sort the issues out.

According to the Tennessee Census of Fatal Occupational Injuries, 124 people died due to an occupational injury in 2019. 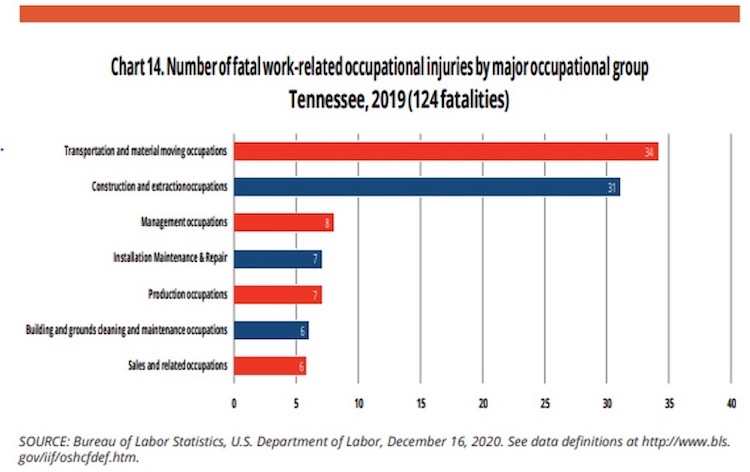 In most cases, Tennessee law clearly defines “Death Benefits” and how a Workers Compensation Carrier should handle this claim. The Carrier must:

What is the Maximum Total Death Benefit?

The “Maximum Total Death Benefit” is a calculation is based on the deceased worker’s average weekly wage. A single dependent would be paid 50% of that wage. If there are multiple dependents, the total amount paid would be 66.67% of the average weekly wage. For instance, if a worker’s average weekly wage was $600, a single dependent would be awarded a payment of $300 per week. If there are multiple dependents, the maximum paid between all dependents would be $400. This weekly benefit is subject to the State’s maximum and minimum weekly benefit rates. In addition, “this compensation shall be paid during dependency not to exceed the maximum total benefit, payments to be paid at the intervals when the wage was payable, as nearly as may be.” Tenn. Code Ann. § 50-6-210. This means that the claim is capped at 450 weeks.

Correctly identifying and paying all “dependents” can be the hardest part of Worker’s Comp Death Benefits. Most often, these dependents will be:

If there are no eligible dependents, the Death Benefits will pay $20,000 to the estate of the deceased.

How Long Will Benefits Be Paid?

A dependent would become ineligible by:

In most instances, benefits would continue for a child who was mentally or physically unable to earn a wage until their death or marriage.

What Other Benefits may Be Paid?

Above, we have discussed the Death Benefits that would be paid under a Worker’s Comp policy. However, in addition to these benefits, the Carrier would still pay any medical bills related to the injury and death of the deceased worker. It is very important that any medical bills received should be sent to the Carrier.

Insurance companies will often attack Death Benefit cases claiming that the death was caused by something other than a work accident. You may need a Tennessee lawyer specializing in Workers’ Compensation to fight this argument.

Contact Us
Practice Areas
Blog Articles
Client Reviews
★★★★★
"We tried to go through the insurance company ourselves, but they basically just laughed at us. So I got in touch with The Lawyers of Brown & Roberto. The insurance company's attitude really changed, and within a week we had our car replaced and rehabilitation going for my wife. The Lawyers of Brown & Roberto stuck in there and fought for us." J. Felver
★★★★★
"Had it not been for The Lawyers of Brown & Roberto, I would be in a mess. I would not have been able to handle the paper work or things that would have been required to stand in a court of law myself. They got the most that I could have gotten for any injury that I had. I was more than pleased with the settlement. They handled my case promptly and very professionally." D. Blakeman
★★★★★
"I would recommend The Lawyers of Brown & Roberto because they are for the client. They are extremely tough when they go to court, they keep you well informed, and they treat you as a person. They are extremely good attorneys. They changed my life. They helped my life because they believed in me. They fought for me. I thank God for them." C. Scarbrough
View More
Submit a Law Firm Client Review